Despite the unseasonably cool summer weather, I spent Canada Day outside at the Embro Highland Games. Embro, a small town, a ten minute drive from my house is situated in lush rolling hills that are every now and then dotted by productive dairy farms. The village was settled primarily by Scots in the 1820’s. In 1856, perhaps homesick, the Embro Highland Society was formed “to preserve the language, martial spirit, dress, music, literature, antiquities and games of the ancient Caledonians.” The society disbanded in 1888, but was reformed in 1937, and Embro has hosted a Highland games every year since. The schedule of events for today included; tug of war, Highland dancing, massed bands, pipe band competition, a British car show, sheep herding competition, roast beef dinner in the hall, and other things relating to Scottish heritage in our area. To be honest, I was there for the food, especially the roast beef dinner, cooked and served by the members of Knox Presbyterian Church Embro. The food was homemade, as only dedicated Church ladies can do and included a pie buffet, I was as happy as a little sheep roaming the Highlands (if that is where sheep roam?)  I also sampled shortbread cookies from 4 & 20 Blackbirds, ate the best Empire cookies that I have ever had, a piece of raspberry pie that was the pie of my dreams,  an order of hand cut fries, split though, followed by a kettle corn chaser. I had to say “no” to the strawberry shortcake and to a Shaw’s ice cream sundae. But next year, I will plan my day so that no food booth goes untried.

It was a beautiful, and happy way to celebrate a birthday; full of laughter, friendly competition, interesting things to look at, and good food, especially the pie. 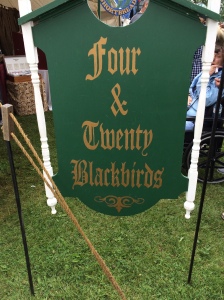